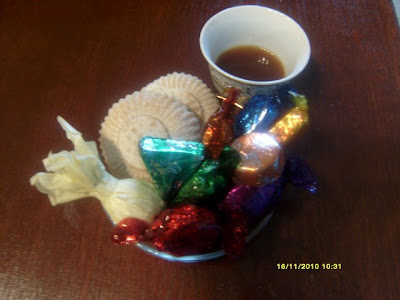 “Qahwa helwe” is also the every day cup of coffee in the . It comes in three different sugar levels: “qahwa ariha” is lightly sweetened, “qahwa mazboot” is moderately sweetned, and “qahwa ziyada” is very sweetened coffee. When you order your cup of coffee in the , make sure to specify which of three sugar levels suits you the most, because sugar is added directly to pot while coffee is brewing.
On the other hand, “qahwa sada” is bitter and it’s served on important occasions as weddings, funeral, family gatherings, and of course on Eid Al-Edha and Eid Al-Fitr. “Qahwa sada” is served in small cups with no handles and in small quantities. The “qahwa sada server” circles around the company and when you had enough of coffee, you have to shake your cup in order to return it to the server.

My first experience with “qahwa sada” was a funny one. “The qahwa sada server” came around the table a second time for anyone who wanted more coffee and for those who wanted to return the cup. What I didn’t know was the “shaking of a cup” part of the ritual. I decided that I had enough and extended my hand while holding the cup to him so he can take the cup away. However, he poured some more into my cup instead of taking it. It happened twice, until my mother-in-law told me I had to shake my cup for them to take it away.

Mateja ^_^
When I cook I usually don't measure. So now that my babies are all grown up, I started to cook all their favorite foods with measuring cups, spoons, pencil, and a notebook by my side, recording every step for future references. Dinner table is that special place where all the family gathers to exchange events of the day, to share special moments, and to make important announcement. And if good home cooked food is served on that table, these gatherings become even more precious and memorable.